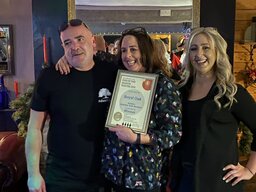 The Royal Oak is a grade two late 18c / early 19c listed building situated at the lower end of Alcester High Street just to the side of the very impressive gold painted letter box. It is primarily a large open plan pub but with sufficient space to provide the visitor with number of options should they wish to socialise in larger groups or as couples. With a nice welcoming log fire at the front of the pub it is said to have the longest bar in Alcester and there is live music on Friday and Saturday nights. In awarding the Winter Pub of the Season to Ruth Mclauren, Licensee of the Royal Oak since February 2017, branch members were originally impressed with the quality of the beers during a well-attended meeting on the 29th of September and this was confirmed by further visits made over subsequent weeks. With three hand pulled beers on offer, chosen on a rotational basis from regional and national brewers, they were found to be of a consistently high quality and the branch had great pleasure in recognising the Royal Oak as currently an up-and-coming real ale pub of some quality. The presentation was made on behalf of the branch by Rhys Williams, Apple contact for Shakespeare CAMRA, to Ruth, her Pub Manager Kerrie, and Adam the cellarman who does an excellent job in ensuring that the beers are always served at optimum quality. The pub was very busy and besides there being branch members present it was also good to see a number of local residents along with the Alcester Court Leet who willing provided the services of the Town Crier in order to announce the start of proceedings to all present.