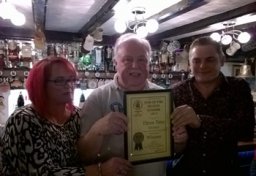 Members of Shakespeare Branch of CAMRA voted the Three Tuns, Alcester as their Pub of the Season for Summer 2015. Having been shut on 29 March 2014 it presented a very dark period in the history of this well known Alcester pub. Many of our members were concerned about the future and many rumours began to circulate. It was then really good news to hear that Mandy Downs and Andy Bown had managed to secure the pub and it re-opened again on 6 March 2015. Mandy was well-known in Alcester, as owner of the Cross Keys. The interior has been enhanced but the character of the pub had not been altered. It was found to be selling a good number of real ales and friendly conversation was still a priority. On 24th November 2015, a presentation was made by Lloyd Evans, Shakespeare Branch Chairman, who commented that he was pleased that the beer quality had remained consistent since the opening and that the choice had been interesting and varied. Mandy and Andy were delighted to be presented with the Pub of the Season award and were really "chuffed and overwhelmed" that their hard work had been so well appreciated.